This is Lorelai Gilmore. 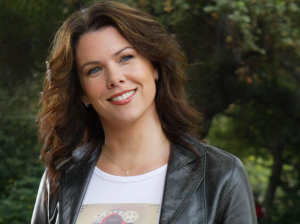 She’s the eventual owner of an inn, mother at 16, and lead of the acclaimed drama “Gilmore Girls.” The show, which started in 2000 dabbles a lot in the nature of families, class, privilege, and growing up, and follows her and her daughter Rory through the ups, downs, and coffees of their lives.

This is also Lorelai Gilmore.

Across the entire seven year run the show never really mentions Lorelai’s eyesight issues. Occasionally, often out of the blue, Lorelai will come on screen for a scene or two and be wearing a pair of glasses. It’s not frequent, but not unexpected either.

The thing is, Lorelai’s glasses got more presence than Dumbledore’s sexuality did in the entire Harry Potter series. And it struck me, on my most recent rewatch of “Gilmore Girls” (thanks Netflix!) what a great example this was of representation.

Representation in the media is a map for identities and people. It’s the way the media portrays groups, communities, experiences, ideas, and so much more. A sort of funky funhouse mirror, media representation both represents and re-presents images of folks–particularly marginalized peoples.

Despite what some people say, media representation matters. Even simple roles like Lt. Uhura in the 1960s “Star Trek” have led to people like Mae Jemison becoming the first African-American woman in space, Whoopi Goldberg deciding to become an actress. John Cho cites seeing Sulu on “Star Trek” as one of his earliest memories seeing himself in his media.

I didn’t see any Asians on television. And you turn on Star Trek and there’s this Asian guy not chopping anybody up. He’s honorable, a helmsman of a spaceship, and it was a big, big deal for me to see that and have a role model. -John Cho

You see, identifying with characters in media is reassuring; it communicates a sense of belonging. Which is probably why studies have shown that white men feel a rush of self-esteem when they watch TV, unlike everyone else.

The problem with stereotypes and erasure is that it promotes the idea that there’s a normal, and worse, that there’s an appropriate age for realizing you don’t fall into that category. Most people can remember nuggets from their childhood that foreshadowed where they’d be later in life. Whether that’s realizing you’re a writer, that you’d collect bugs, or that you’re attracted to all genders is fairly inconsequential; kids don’t necessarily have a sense for where this will take them.

By limiting exposure and examples of gay characters like Dumbledore, leaving their sexualities to be just an afterthought that never found its way onto paper, producers of media are not just contributing to the heteronormative culture we’ve built up. They’re taking away a chance for kids to know that growing up “different” can mean many things, including that it’s not the main act of your life. Nobody is just one thing. You’re not simply your gender, race, sexuality, class, favorite Nic Cage movie, or any other marker you may carry with you. When J.K. Rowling assumes that she has to find a way to “work in” Dumbledore’s sexuality it furthers the notion that she’d even need to.

Representation isn’t after the fact. Representation can’t be just a quick quip to be confirmed by filmmakers. And representation doesn’t have to be the main focus of a character. Sometimes it’s as simple as slipping on a pair of glasses–half moon or otherwise.