It’s nothing revolutionary to talk about how “The Affair” is a show that dabbles in forced perspective; it’s essentially the hook of the entire thing. But this episode stands out, to me, as one of the few that really draws your attention to it.

It’s goes beyond the sight gags of Allison’s clothes, or the narratives each of them have to remember why that was important, and into how they see the players around them. And it’s a credit to the acting of the supporting players that they can so believably play a character through someone else’s eyes.

Noah’s in-laws, for instance, often come off as the picture of snobby class. But in this episode, or at least Allison’s version of this episode, we find out that he came from a relatively low-income household, so he would see the sort of decadence they live in as devoid of compassion. Until now I had always filed their performances as somewhat one-note, but their portrayal not only make more sense now, but they serve as a sort of clever reminder that there’s always more than meets the eye in this series. Similarly, Cherry seems to be an almost incongruous mash of a person; one moment chipper and friendly and the next making sneaking, passive-plays for claim over Allison in front of Athena.

And Athena is her own little breath of fresh air for Allison’s perspective: it’s not that what she’s saying is right, per se, but she has her own narrative that’s in some ways just as valid as Allison’s. Allison never really tried to get off the island and doesn’t believe (or, as Athena somewhat condescendingly puts it “forgets”) that she could’ve left with her mother if she had really wanted to.

This episode is rife with material for exploring the people who orbit Allison and Noah’s affair, in a way the episodes haven’t quite done before. Oddly, or perhaps appropriately, Oscar remains every bit as full of douchebaggery in both visions, which could mean that he’s just that much of a tool. Or it could be that as Allison and Noah recite their stories they are on the same page about Oscar for a reason other than his personality. An easy mark, perhaps? 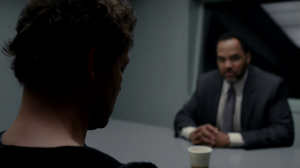 Which brings me to my final point. I’ve said it before, that for a show that doesn’t seem to cheaton the drama and intrigue they’re got a passionate interest in a coy, showing-of-cards, and apparently the cinematographer is in on the joke. Off the top of my head, I remember most of interrogation scenes being a fairly straightforward over-shoulder, shot-reverse-shot.

But in both of the scenes with Allison and Noah talking to the detective, the camera noticeably angles itself so that Jefferies is shunted off to the side. A bit of literal forced perspective, for you. Of course both of them are getting up to leave after their conversation, but the way the camera moves–particularly in Allison’s (where she is referred to as “Ms. Bailey” hmmm) swivels, as if it’s sort of clearing its throat to get us to notice, or remember, that they’re being observed. But by whom?

Unsure for now. But is anyone else thinking that Detective Jefferies is one of the most interesting characters on the show? Where’s his point-of-view series?