You can’t avoid dating yourself. It’s coded into everything you do; style, language, even casual observances of the future. But many movies strive to be anyway, hoping that if they exist outside of the time continuum they can go down forever as something that “really holds up,” or at least a classic. And it’s clear that the Marvel movies are attempting to do the same.

They don’t wade into the politics that coincide with their release like “The Dark Knight” does; they build a universe just adjacent to ours, where the politics is more concerned with super powers than it is with super lame election candidates.

But what seems to be lost on the Marvel-powers-that-be is that by trying to remain the clean-cut classic comic cinema that’s above all the veiled agendas it’s inadvertently dating itself—and robbing its stories of their original punch. Take Spider-man for example, who’s about to undergo his umpteenth (alright, you caught me, his second) reboot, and once again the actors considered are all traditional Peter Parker: nerdy white, males. 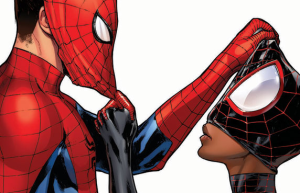 Now that we live in the age of the geek, this could’ve been a great opportunity for Marvel to make a statement, to bring the power back behind the story that resonated in the 60s. Maybe a Peter Park, a Korean American whose background would lineup so well with that of an immigrant’s background. A Miles Morales, whose Uncle Ben was shot by police in a situation that mirrored the experiences of so many African American families sadly experience today.

Yes, it would mean wading into territory that might not be all fanfare. But it’d be a powerful move, something that would remind viewers who these comics were catering to when they launched and the force for justice they still can be. And I wouldn’t be surprised if it were met with support from its viewers; I mean, hey, it’s worked so far for “Cinderella” and “Mad Max.”

But given Marvel’s 3000 year plan, and resistance to taking a gamble on anyone but a white male, it’s unlikely that we’ll see this anytime soon. But Marvel, remember the (paraphrased) words of the wise David Bowie: time will change (how viewers perceive) you, but you can’t change time. You may as well get with them.