Missed an episode? Check out the tag.

Chapters 2 and 3; in which we see a lot of people getting what they need, if not what they want.

Though I wrote “awww Dennett/Baya so doomed” in my notes, it’s hard to not see this coming. From the beginning their plotline has been  majorly challenged, and the passage of time hasn’t helped much. In their own way they both have a pragmatism that had gotten them this far in life, but they were constantly blinded by each other, the baby, and the idyllic life that could live in their futures.

I’m not sure Bennett’s flashbacks really did much to illuminate the story here, beyond establishing that his behavior at the end (with a touch of dramatic flair) was part of a pattern rather than finally seeing the writing on the wall about him and Daya. Similarly, in the next episode Nicky’s days on the outside didn’t illuminate too much anything that the episode’s arc didn’t accomplish. We saw how destructive drugs made her in her choices and relationships to others, 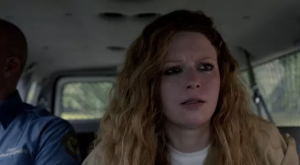 and her aloof relationship with her nature finally coming tragically down to Earth was clear thanks to Natasha Lyonne’s acting chops.

What I will say is that the flashbacks did a great job highlighting something OITNB excels at: making characters three-dimensional without making excuses for their behaviors. Nicky’s relationship with her mom—though slightly redundant, as I said before—were actually some of the most interesting scenes, and a great way to grow on the seed planted in the season opener.Likewise, Alex and Piper’s relationship benefits a great deal from the flashbacks. Getting to see them play out across time gives some context for the rush of emotions—good and bad—they get when they’re around each other. Piper is used to feeling like the smaller of the two in their relationship, and though she’s able to see how she was wrong, she’s still immature about letting Alex deal with her feelings. These weeks their plot lines have seemed like the least important of the bunch, but what time they do have they sell the hell out of.

Caputo and Healey are probably two characters the show has the shortest patience with, but even they are given the time to balance out their bad behavior. Caputo is really trying his darndest to make this prison work, and Healey is still terrible at working out his feelings (and is no better at dealing with women). They’re not great, but they’re not entirely wrong either. 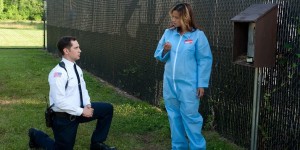 There’s a metaphor for the prison system as a whole buried somewhere in here. Trying your hardest but still being part of the problem. It’s something Alex mirrors when the new guard tries to get her to engage. “Everyone thinks they’re one of the good guys,” she says, but that doesn’t make the system any less forgiving.

In some ways the inmates are forced into more clarity on this than the guards. In their own way they are dealing with a lot and as Regina Spektor is quick to remind me, they’ve got tiiiiiiime to really focus in on it. And though the guards may all sympathize or even feel the heel of the system on their back, it’s the prisoners that are feeling the effects of it.

-Alex has a salt tattoo on her shoulder, which I find interesting and maybe no one else does.

-“Nice is for cowards and democrats”

-I will, apparently, forever associate Mary Steenburgen (Pornstache’s mom) with playing awkward mother characters. See this, and “30 Rock.” Really that’s it, but I suppose we can throw “Back to the Future III” in there for good measure.

-God help me I root for those two guards in love.

-“I will potato her at a later time” says Suzanne towards Penn. Please do.

-Given the kind of hopeless nature of the plot line, it was nice to have Daya’s mom being so anti-Bennett talking in their meet-up. A little silver lining on a very dark cloud. “Really shit, tbh” as my notes say.

-Aww, Red does know about her store. And she’s not afraid to call Piper, Healey, or anyone else on their shit.

-I always read Piper’s sabotage of Alex as a sort of protection, and it felt like the show was leading me to think that as well. Maybe they’re just really cooling on her, but now the whole thing seems kind of selfish—which, really, is just classic Piper. Right down to the line of “helpfully” calling Alex a cockroach.

-Taystee bringing the analogies this season