Today a much talked about interview with Kristen Stewart, the starlet reportedly “confirms the rumors going around about her sexuality.”

“Rumors” is almost mild for the scrutiny Stewart has put up with regarding her personal life, so the most surprising thing to come from the interview was the fact that the actress even answered the question at all. 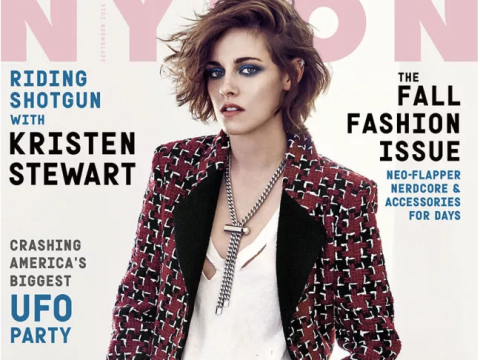 “Google me, I’m not hiding,” Stewart told Nylon. “If you feel like you really want to define yourself, and you have the ability to articulate those parameters and that in itself defines you, then do it. But I am an actress, man. I live in the fucking ambiguity of this life and I love it. I don’t feel like it would be true for me to be like, ‘I’m coming out!’ No, I do a job. Until I decide that I’m starting a foundation or that I have some perspective or opinion that other people should be receiving…I don’t. I’m just a kid making movies.”

It’s an odd response because Stewart certainly didn’t owe anyone an answer, but by engaging she was taking a tentative step towards acknowledging a personal side in a (very) public light.

Her words were still ringing through my head as I ran into another actress, Anna Faris, in my Twitter feed. Apparently a brazen reporter asked her about the rumors of her husband cheating on her.

I have always kind of believed that part of the rumors of celebrity couples were sort of true – because they had never been a part of my life. I thought, ‘Maybe there is a kernel of truth to that.’ ”

For us it was like, ‘What the heck?’ This has been blindsiding to us. We have an amazing relationship.

It has been weirdly stinging.

It struck me as an incredibly thoughtful response. She didn’t have to engage with these rumors at all; neither of these women did. They don’t owe the world their personal lives, and they certainly don’t owe them insight to them.

But Faris’ response seemed like a genuine attempt to acknowledge some of the hardships of marriages (particularly when subjected to the glaring cruelty of the paparazzi’s flash) endure. It’s not that Faris’ marriage troubles are universal, but I can see how someone reading them might be inspired to engage with their partner(s) about the uncomfortable uncertainties you feel in your relationship—even if you know the rumors aren’t true.

But KStew’s problems are even less universal. In this day in age, heterosexuality is still the default, and not everyone is trying out the average LGBTQ* couple in the public domain. It’s not as simple for Stewart to say “I’m dating X” or even to say “well I’m taken,” because even the acknowledgement of a same-sex relationship is a label, for most readers.

I guess I find it odd that Stewart acknowledged the rumors and dangled a hint without really weighing in on the issue, but I’m not surprised. That’s the sad fact of LGBTQ* politics these days: It would’ve been cool for KStew to acknowledge her same-sex relationship (if that is what she’s talking about) and then manage to talk up some LGBTQ* politics. But I can’t ask that of her. I wish she would’ve spread her spotlight around like a disco ball, but I can’t fault her for wanting it to shut off entirely.

Heavy is the head that wears the disco ball. But she strikes me as an intelligent young woman, so I would’ve loved to get her insight the same way I “got” Faris’.