As Frozen moves off the throne of “most recent animated release that’s taken over our toys, our vitamins, and ourselves” and moves into production on Frozen 2, I’m starting to see a lot of people talking about how Frozen was never the best sister story from Disney anyway. Lilo & Stitch was.

Here’s my rebuttal: They both are.

As a middle sister who grapples with depression, I understood all too well the mixture of shame, embarrassment, and sadness Elsa felt when she hid herself (and her powers) away from Anna all those years. I knew the feeling of thinking that if you could just get yourself under control you could release yourself from your self-made prison. And my sisters knew the feeling of having a sister hide out in her room. 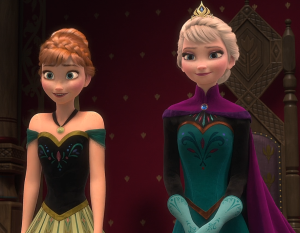 For all you can say about Frozen‘s rushed plot or some of the worser songs of the Disney canon, sitting in the theater I recognized the feelings there—I felt the feelings there, for the characters and for myself. That’s good work.

But I’m also a sister who’s got a good 15 years on her youngest sister. As we watched her celebrate her ninth birthday this week, I saw the same spark and creativity that painted Lilo’s world; the zest and kindness she feels towards everyone and everything she wants to welcome into her fun. When I rewatched Lilo & Stitch recently, it hit me that I understood Nani’s sense of responsibility for her younger sister. Sure my parents are still alive and I’m not tasked with raising her, but this situation is much more relatable to me than it was when I first saw the film 14 years ago.

That the feeling rung true to me 14 years prior and still now, as I am closer to that possibility (and hopefully not too close) shows the strength of the connection built there.

To me, neither of these films are better than the other—at least, not on the grounds of their sister work. There’s an argument to be made that Frozen was able to be celebrated because it was about two white girls, even if it somewhat recycled the feminism of Lilo & Stitch. That shouldn’t be unexplored. But to me that doesn’t make Frozen bad, or redundant. These are two, distinct and graceful stories about sister love. Here’s to many more.