On the eve of UnReal‘s finale, we’ve all got questions on our minds: What will Quinn and Rachel’s renewed alliance yield? Who will Darius pick? How the hell did this show go so off the rails?

There aren’t a lot of definitive answers to be found (yet). There’s a lot of awkward growing pains and remaining faults that lined the path for a disappointing sophomore year from last year’s critical darling. But most agree that the seventh episode of the season, “Ambush” is a lowpoint for the show.

After Darius, Romeo, and two of the contestants steal a car, Rachel and her showrunner boyfriend Coleman sic the cops on them, knowing it will make for great TV. When Rachel starts to have doubts after seeing just how far the cops will go when they pull over a black man in a fancy car that’s not his without a license, she darts out to call them off—only to alarm the cops, who accidentally shoot Romeo. 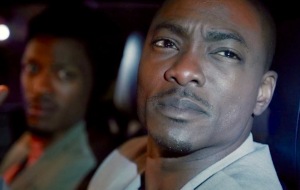 After the shot the camera follows Rachel as she trips in the field she’s running through, the camera holding and tumbling with her, as she lies on the ground in shock. It’s a highly manufactured shot, one showrunner Sarah Gertrude Shapiro wanted especially to show how the event rocked Rachel and “turned her world upside down.”

Except, it’s not really her role that got turned upside down. It’s Romeo’s. Rachel was not subject to sadly prescient police brutality, Romeo was. Darius was. Rachel, a white woman, would never be. And while the effects of that shooting should affect her—as the cause, bystander, and protagonist of the series—it’s absurd that her narrative would be the one focused on here.

Two episodes later, one left in the season, and we still haven’t gotten an update on Romeo’s medical condition. For a show that’s allegedly supposed to be showing how those outside the black community can’t understand pressures on that community, and then to tell their story specifically through someone else’s viewpoint is a wildly misguided and privileged thing to do. Black lives matter, and white showrunners shouldn’t only engage with that when there’s white lives involved.

Perhaps with a few cuts and snips UnReal could’ve saved its white savior narrative. But the fact that we still aren’t sure whether they’ve saved Romeo means there’s a whole season’s worth of cuts and snips that had already gone untouched.