Interview with a Vampire feels like the quintessential example of a bad book adaptation: You can tell there are big themes lurking in the background. There’s a sense that these emotions aren’t melodrama or camp but sincere. And yet, nothing about the movie is really able to connect. 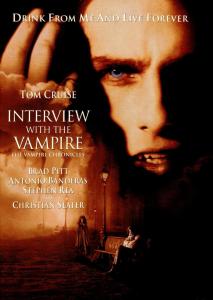 For instance, the movie seems to revolve around the connection between Louis de Pointe du Lac (Brad Pitt) and Lestat de Lioncourt (Tom Cruise), their sometimes diametrically opposed views on the afterlife and vampiric sensibilities. For the first two-thirds we follow as they banter between themselves, haphazardly drawing in victims and even a “daughter” in Claudia (Kirsten Dunst). Then the movie drops this plot line, in favor of a turn to Armand’s (Antonio Banderas) coven in Paris, only to return later with a flourish to the “central relationship.” In a book these chapters might feel a bit episodic, but in the movie there’s a lot more telling that Louis and Claudia digest the various pains of the world than there is showing you.

Instead the movie paints in broad strokes, favoring the book-translation that seems to name-check important plot points without paying much attention to the emotional weight of them.

Some of this is likely due to the casting. Young Brad Pitt clearly hasn’t discovered that he is a character actor in a leading man’s body—unlike co-star Tom Cruise, whose vivaciousness buoys nearly every scene initially. Pitt is utterly wooden; a precursor to Robert Pattinson’s later turn in Twilight. It’s clear that Louis de Pointe du Lac is tortured. But we, as an audience, mostly know that because he spends so much time communicating this in his voiceover, and sitting on the sidelines, peering into a world he understands but still doesn’t want to. Given his stiff and mopey state, it’s hard to believe that one of the through lines of the movie is that every vampire Louis comes in contact with yearns for his company above all.

It’s left to Cruise and Dunst to breathe some life into the film, and they each do so with great aplomb. Cruise manages a vibrant Lestat initially, seamlessly shifting between the vampire’s complicated desire for Louis as a dissimilar companion and his frustration with Louis’s inability to want to understand him. But it’s Dunst who manages to fully embody the complexities of the vampire lifestyle—not to mention the added complexities of her character, all as a child not nearly as aged as Claudia. Hers is the only performance that seems to be able to tap into the poetic and nuanced style of Anne Rice.

Otherwise, Rice’s novel and its shading is lost in a film that’s done away with subtlety and themes of grief in favor of what reads as gothic camp. Though its style and themes would certainly influence modern horror, and in particular vampire tales, Interview with a Vampire isn’t able to do much with the infinite lifetimes of its heroes. And we thought we could have it all.