What up what up, we’re back at the end of another month! Let’s get some of the more important visuals from this past month out of the way: 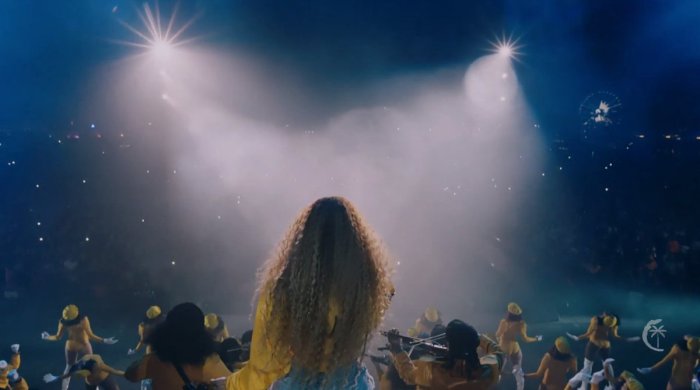 It was so momentous that during my mid-month check in, wherein I take notes about what I watched in the first fortnight of the month so that the end-of-month Zosha has more memory, Beychella was the only thing I managed to write down.

Anyway, suffice it to say this was a month, and now we’re on to May. But before we do that, let’s review some other stuff:

There’s a lot I sort of wish I could change about Solaris, but I’m so immensely grateful for it. I love finally getting around to bigger names like this and seeing all the ways it shaped and informed a genre, like slotting in a puzzle piece — a middle one, not even a perimeter. Solaris is so raw for such a structured film, a perfect balance of wearing its ideas on its sleeve while also being a deep well to mine for philosophy.

Janelle’s new album is here! And guys, it’s good. At parts it feels not quite as good as the sum of its parts, but between the call to arms that double as bops, and the stunning visuals of her accompanying “emotion picture” there’s no reason to not be listening to Janelle right now. Seriously what are you doing? (Unless it’s Beychella; then you get a pass for whatever.)

After having heard people talk about this (as Adam Sandler’s best performance ever) for years, I finally took the plunge for a forthcoming essay I edited at BW/DR. And wow. Wow! So enchanted with Paul Thomas Anderson as an auteur so preoccupied with the alchemic magic that happens within relationships, and how beautiful—and challenging—it can be to find someone whose weird matches your weird. This film shared so much DNA with Phantom Thread, I can’t wait to watch them together.

Well the latest (and, apparently, penultimate!) season has wrapped and dAMN WHAT A TWIST. But leading up to the twist the show managed to do something truly remarkable: Ground itself utterly and completely. Every move felt right, every pain cut deep, and every smile was like that first day of 60 degree sunny weather in Seattle after winter. So in awe of how much this show does while making it all look easy.

“How Riverdale Turned Archie Into a Facist”

This essay is exactly the kind of thing I want to do with all of my time. Focused, yet flexible enough to envelop broader criticisms and insights about the show, this piece grabs you with its title and earns its keep by tracing a path so eloquently I ended up thinking I hadn’t given the show enough credit for what it did. 👏🏻 👏🏻 👏🏻

As part of my reading books that movies I loved recently were based on, I reached for this one. So much more urgent than the movie, yet still just as sticky with heat. Spent a week after reading this thinking that I had already been through a week of summer weather, but realized it was just André Aciman’s feverish prose that painted such a vivid picture it was like I was right there in Italy with Oliver and Elio. Perhaps not quite as sophisticated as its cinematic counterpart, a bit less interested (and thus, neglectful) of the age difference at its core. But invigorating nonetheless.

Two years of Lemonade, looking back at Deaux St. Felix’s stunner of a review from back then.

And now to leave you with a distinct Youtube mood of the month: