We pick up right where we left it: Noah passes by Alison on her bike, and suddenly the world slows. They circle around each other: He’s interested in getting back together, she’s not. He wants affection, she wants the divorce papers signed and submitted. But no matter how they posture themselves, one thing is clear: their chemistry is undeniable.

For the second week in a row we have perspectives of Alison really aligning. Though Noah shifts from erratic naiveté to weighty romance in Alison’s and his perspective, respectfully, Alison remains even keel throughout. And though Noah’s teasing of her can often come across as almost bullying—teasing her that she “used to be more fun” when she won’t skinny dip in a hot tub with him, pulling her into a day trip to Block Island with the promise of signed divorce papers—it’s clear that they have some sort of understanding of each other. It’s one she shrugs off at first, and that he complicates with his bullheadedness, but there’s a lived-in familiarity about them. Though awkwardness should hang in the air their conversation flows. Even in its strain it never feels stilted. 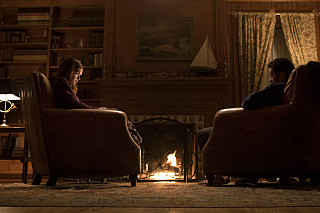 And so by the end of their day trip, accidentally trapped on the island overnight after missing the last ferry, they find themselves sharing wounds, going deeper than they (apparently) ever have. She tells him that the woman she was before Gabriel’s death died along with her son, and Noah tells her that he helped his mother kill herself when her MS was getting the best of her.

The Affair has so often found itself tangled in bullshit grief that it can be easy to forget that the show has some kind of profound things to say when it touches on the real thing. Complications like we end with tonight when Noah crashes Juliette’s car after getting run off the road by his prison guard tormenter only to find himself on an empty road feel like conflict just for the sake of conflict; lamp-shading that Noah is popping Vicodin with a warning from Alison that they’re addictive is just adding wet logs to the fire. Listening to Alison and Noah really talk, for arguably the first time in their relationship, that’s a whole different ball game.

Of course Noah is still a bit of a cad: He only brings up Joanie when he’s trying to lure Alison back to him, telling her that he’s ready to be with her and “raise someone else’s kid.” Though he may correctly intuit that Alison seeks out punishment, his suggestion that she can “flagellate herself for the rest of her life” in front of Cole and Luisa as what she is looking to do, sells that he doesn’t necessarily see her connection with Joanie as important as she does. Whatever clear eyes Noah found in prison are still a bit cloudy, Vicodin addiction or not. He stampedes past her boundaries and asks more of her than he’s prepared to return. Though at first she lets him, she holds firm on the divorce and whatever catalyst for change is within him finally gets him to sign the divorce papers.

Dominic West and Ruth Wilson both mold whole, flawed, and tangled studies of their characters here, only to find themselves a bit shortchanged by the writing, which seems more interested in the intrigue than it is in the intricate humanity at play. But when all is said and done “305” ends with Alison putting her foot down, getting space and a divorce from Noah, and a sleepover trip with Joanie for her birthday. It’s a new frontier for The Affair.