I feel like I’ve said this before, but “The Affair” has never been the most nuanced show with its visual imagery. And clearly, season 2 is ready to double down on that.

If the mess of emotions we left our characters in at the end of last season didn’t tip us off, the premiere of season 2 did: A storm is coming. And our web of people and lies is smack dab in the middle of it.

Only know we get to see them grow: This season has already seen the introduction of Helen’s point of view, and next episode will be Allison and Cole. And though the show seems to be committing to more dramatically different memories of events (if you’ll recall, last season’s finale really took divergent memories to the extreme) it seems to be committing to them a bit more honestly here.

The narrative device—at its best—serves to show us not just how the primary characters are seeing the world, but also what those around them are playing off of. It’s not that memories IRL are necessarily so different, so much as the emotions that cloud what we remember about a scene or event effect what hurt and feelings end up sticking with us.

The wildly different memories of the mediator scene actually felt more natural to me; it makes sense that both halves of the former couple would feel talked down to, bruised, and miffed at the other’s curt reactions. It explains the gulf between them, if it doesn’t necessarily excuse it.

Helen’s POV is new, so let’s start there: Here we see that Noah is a jerk (no surprise, for either us who have already found him to be a jerk in basically every POV, or for an ex-wife to feel that way about her philandering ex-husband), and Helen is sad. It should be an interesting exercise now that we get to see Helen in her own right, not through her husband as he falls of love or his mistress as she falls deeper into an affair.

So far it’s been a lot of how we manage our grief and, sadly, how others do. Throughout her half Helen is indulged, somewhat, but often it’s limited by others; the most heartbreaking scene comes as she arrives home after a rough afternoon and finds Whitney screaming about her essay, her mother micromanaging her house, and her youngest son weeping because he’s learned that his whole world is permanently upended.

On the flip side, Noah’s world has him really (and somewhat finally) grappling with how decisions can affect and ricochet through the lives of others. It’s present in the more obvious interactions with his family—very heated arguments with his ex-mother-in-law, his kids removing themselves from his presence—but it’s also in the small conversations with his friend, who plans to have his wife call Helen and set up a dinner. It may all feel worth it when Noah comes home to Allison, but the conversation that these two will have for the rest of their lives, or at least for the forseeable future, isn’t going away. For him the storm seems to be just brewing over his shoulder, just out of reach. And for Helen the storm is in full swing.

“Orange is the New Black” has always been about how prison can dehumanize you, can break you down and pull the humanity—or at least the normality—out of your existence. In many ways the lives of the inmates at Litchfield Prison are on an indefinite hold. But season three’s opener, “Mother’s Day,” reminds everyone that some things don’t go away just because you’re stuck in prison.

Episode one is a sort of check-in with all the characters we’ve grown to love over these past two seasons: Alex is back, Daya’s pregnancy is trudging along and her relationship with Bennett is confusing, Morello is struggling with life in prison while Red has a renewed outlook, and Piper doesn’t make it on screen until 12 minutes into the premiere.

Threaded through all of these situations is the upcoming Mother’s Day event at the prison, where inmates’ children can come join them for a sort-of carnival day. It gives the episode a natural context for framing how relationships are grown and broken in prison. Sophia and Gloria’s relationships with their children are strained, and the prison walls don’t help, similar to how Yadriel tells Maria he’s going to stop bringing their daughter to visit her. 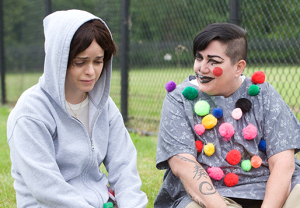 Conversely, Alex and Piper find a renewed (though no less fucked up) bond through their shared space, and Pennsatucky finds some comfort in Boo, even if it’s still not perfect.

It’s one of the things the show has toyed with before, but never quite as serenely, across the board as it does here: that there’s some good to come out of the relationships here, even if they’re just made here out of necessity. Those bonds that form may be for your own good, but there’s more to them than meets the eye. Suzanne still aches for Vee, even if she was a manipulator (which, it’s unclear how much Suzanne is read in on that master plan), Rosa’s effect is felt even after she’s gone, and hell, Poussey and Taystee should go down in the history books.

But it’s a dramedy, and by the end of the day the inmates are each reminded where they are, and who they are to the system. The show played it just the right amount this episode, I’d say, between all the make-shift decorations and activities and the heart-breaking scene where the kids are confused why all the prisoners need to get down on the ground.

OITNB is the sort of master of its own pacing style, showing both too little and too much. With all the characters it does the round with here, there’s not much to be said for full interpersonal plotlines. But then, this episode doesn’t care to. It’s planted the seeds of a lot of things (Poussey’s mother, Boo/Nicky trying to get rid of their drugs, Alex and Piper?? *eye roll*). Now we’ll just have to see what grows.