“I think we’re really close when we’re going to have to retire ‘sitcom’ or ‘drama’ as a descriptor for these shows,” said Matt Zoller Seitz, Vulture TV critic, on a recent episode of the Vulture TV Podcast. “[Atlanta] is a half hour show, and it’s funny, but I don’t know if I’d describe it as a situational comedy.”

But it’s not all fun and games—I mean, obviously, as the lines between comedy and drama get blurred—some aren’t willing to let the shift happen without a comment, as Dan Nosowitz writes for Splitsider:

Not so long ago, my favorite comedies were light and fun and escapist. Today my favorite comedies tend to be dark and not always funny. With a few exceptions (Broad City, It’s Always Sunny In Philadelphia, Unbreakable Kimmy Schmidt), the best comedies on TV are not really suited to a casual, I-just-want-something-funny viewing. The remaining comedies that still aim for sheer jokes are either garbage (The Big Bang Theory) or highly experimental and thus also not really suited for casual watching (The Eric Andre Show, Lady Dynamite).

…The joke-focused comedy now seems somehow uncool, a little dusty. TV has drifted into a space where boundaries matter less: a show can be 11 minutes long or 90, can air on an app or on broadcast TV, can feature huge movie stars or complete unknowns, can come from any country and become a hit domestically, can take on any subject in any way. With that kind of freedom, a half-hour sitcom seems unnecessarily restrictive and old-timey, and not very exciting.

There is, I think, a diminishing pool of superb joke-focused TV comedies, a void left by 30 Rock and Arrested Development and New Girl (I know, it’s still airing, but be honest, have you watched it in the past few years?). This isn’t a grumpy-old-man screed for some form of the past like multi-camera shows, but a plea for something simpler: I want more shows that are, you know, fun. There seems to be some feeling that to be great, truly great, a comedy can’t just be a comedy, but must also tap into something dark and real and painful.

On the one hand I see Nosowitz’s point: I love comedy, and there has been a dearth of “easy to watch” comedies in my rotation over the past few years. Though the rising tide of prestige TV and sheer amount of original content promises more diversity; more room for experimental, boundary-pushing shows to breathe, the advent of “prestige comedy” is a fairly traditional mindset of undervaluing comedic acting. It’s why Robin Williams wins for Good Will Hunting but not any of assorted, brilliant comedic turns. It’s why Mad Men or Breaking Bad get to be considered “innovating prestige TV” while staying almost entirely humorless, but Jane the Virgin needs to be the first one to call itself out.

But it seems a bit narrow-focused to say that there are no more just “fun” shows. New Girl is still on Fox; over on NBC the laughs are fairly easy and free-flowing on The Good Place or Superstore; ABC offers a whole block of comedies like Fresh Off the Boat, Black-ish, The Carmichael Show, The Goldbergs, Modern Family, The Middle—you get the picture. Like someone who complains that they’re not hearing something about a real world development on their Twitter timeline, what you choose to follow is reflective of you and your tastes.

Nosowitz’s main point—that “prestige” comedy is being favored over the more carefree comedy of old—can still be valid; after all, most viewers aren’t likely to tell you that The Middle did something so fantastic it blew You’re The Worst out of the water. But I disagree with the idea that there’s inherent value in comedy just because it forcefully keeps it light. Where he argues that the “depressing lives of the cast of Cheers” is just some of the darkness that exists “in the background,” it seems disingenuous to say it should stay there. I won’t say that modern comedy is doing comedy better than older sitcoms, nor would I say that our generation “knows better.” But as part of building on what came before, comedy writers are drawing out that darkness and actually acknowledging it. 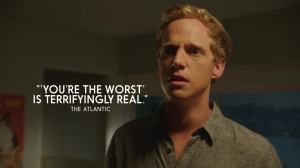 Some shows make this look easy—It’s Always Sunny in Philadelphia is the logical successor to the “apathetic psychosis” of the Seinfeld crown, staying light on its feet and letting the audience appreciate just how depraved this gang can get; You’re the Worst expertly guards its characters with emotional barbed wire until suddenly it forces the audience to realize how flimsy and cruel their defenses are. But ultimately that acknowledgement of humanity (or the disassociation with it) is just as real, and necessary, as it is on something like Modern Family or Black-ish, even if on those shows it can seem a bit more saccharine.

No one I know exists wholly in the drama or comedy realm. Even in their serious moments, most people I know only muster about 20 solid seconds of solemn communication before returning to banter. That doesn’t make life hard to watch, and I don’t think it makes comedy tinged with serious themes—BoJack Horseman, You’re the Worst, or Jane the Virgin—harder to watch either. Modern comedy writing, with all its warts and dips into drama, may not be inherently more realistic than something like I Love Lucy or Cheers, but it does feel a bit more honest. 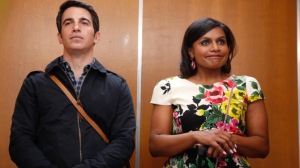 Nine seasons in and the characters of “It’s Always Sunny in Philadelphia” have committed handfuls of felonies and societal faux pas in their endeavors to be sophisticated and accomplished. And yet for all its dark comedy each episode seems to exist almost in a vacuum, (almost) never needing the characters to learn from their mistakes in the past. It’s curious, since the show has covered themes like cannibalism, arson, scamming, adultery, murder, terrorism, welfare, child exploitation, abortion, fraud, alcoholism, and (good lord) even more, why “It’s Always Sunny” would be widely considered one of the smartest comedies on TV right now.

Indeed in an age of heightened awareness around helping groups who were previously marginalized, it’s because “Always Sunny” is political incorrectness at its best, because it does what so many comedians try to: it punches up.

In a culture so over-saturated with jokes at the expense of oppressed people — often defended by bullshit arguments like “first amendment” or “don’t be too sensitive” — it’s a rare comedic gem that can so wholly call itself on its bullshit. It never quite crosses the line into self-aware, but the show does manage to make it clear that the joke is on the characters themselves. This narcissistic gang of children are the ones who are really at fault. “Always Sunny” has often joked about homophobia, trans*phobia, racism, sexism, but the aim is to put those who further oppressive culture, rather than make light of those who carry the burden of these -isms.

Though the show isn’t perfect (what media is these days?) it’s not telling offensive material just for the sake of being edgy, or even just because the aloofness of these questionable acts so often verges on ridiculous. It’s real “edginess” comes from the fact that the butt of the joke is the characters who are so insensitive and cavalier in their unconcerned way.

Who we feel we are allowed to laugh at reveals larger cultural discourses. Pretending that comedy exists in a vacuum of culture or should be free of awareness is a fool’s errand; analyzing humor in all our media allows us to better understand assumptions we take for granted. “Always Sunny” just makes it look easy.