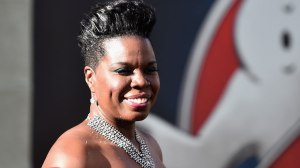 It started when Ghostbusters was released, and Jones began receiving a near constant barrage of hate-filled messages. When she decided to not hide the racism and sexism she received on social media any longer, it drove her off Twitter for a few days. And then just today her website got hacked, with malicious hackers posting photos of her and her passport/driver’s license, and even her phone number.

On Twitter it’s lead to an outpouring of sympathy, anger, and love for Leslie. But none from her coworkers. And that silence is speaking louder than anything else.

At worst they’re turning their back on a co-worker who’s on the receiving end of a firehose of personal, harmful attacks just for starring in the same movie they did. The most optimistic way to look at it is that, as her friends, they are reaching out in real life and ways more effective and out of sight of the public than social media. Perhaps they’re doing so to not wade into the fray or paint a target on their own backs (or, as high-profile women on social media, simply turn around so people can see it).

But how can that be the best case scenario? How can we continue to accept the barrage of sexism, racism, and hate spewed at women—and in particular women of color—on social media as a “norm”? Why do companies seem to think that this isn’t a flaw only a byproduct?

What luck, for these trolls, that they are able to just represent the status quo and not stand out as a black woman. What luck. What a fucking curse.