Finally some semblance of reason from these people. Specifically, Noah and Helen. In this episode Martin’s health issues (after first appearing earlier this season) make way for some real airing out of the room, and Helen finally sees what really matters.

It seemed to me like the show was making a case that it’s not that everything is suddenly in perspective, per se, so much as it gave Helen and Noah a breather and a reminder of what it is they’re really fighting for and about: Their kids.

I kept expecting Helen to break down through out the episode, but her half is really about her strength and how she let herself get lost in all of this. Helen’s mother can’t believe that the anger Helen felt didn’t justify her doing whatever was necessary, and that led to her offering helpful unhelpful advice that was not in tune with what Helen needs. And in all her grief and rage Helen didn’t notice how far she had been pulled down from what she wanted—to close the book on this whole ordeal—until she literally removed herself from the conversation in the lawyer’s office. It was then that she finally saw how little voice she was really having in the whole proceeding. 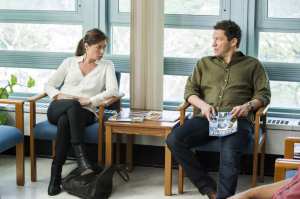 And from there she seems to be really pulling herself up: She makes peace with Noah over Martin’s hospital bed, she lets Noah hang out for a week in her house, and even offers to have him stay there with the kids on his weekend. Noah, in turn, notices her kindness, and isn’t a total fuck-up. Though we don’t see the hospital trip from his perspective, it’s clear that the ER room was home to them revisiting what it was about their partnership that made them good together and good parents. Martin’s doctor’s game plan of “let’s all work together” is something so innocous, but it’s exactly the sort of mundane statement that can pull you out of your funk and back down to Earth.

Of course Noah’s girl-trouble isn’t over there. He’s ready to move Alison back and move on with their lives, but—surprise! The way he left his fiancee alone for six weeks with very little (at least on screen) by way of communicating where he was didn’t inspire a lot of confidence, especially after last episode’s book reveal.

“You’ve been wonderful,” is something that Noah needs to hear from Alison, and since we’re seeing this from his perspective I don’t even know if that’s what she really said or just the high he was riding from the sudden promise of the future. It seems a bit simple, given that we know how much Alison has been struggling to find understanding and her place in the world, honestly. Which is why the next part—where she rips into him for his book-version of her—feels so much more honest.

It feels right to me that Noah would’ve known that his portrayal of Alison was sensitive, maybe even while also knowing that it wasn’t her, while simultaneously lifting it almost entirely from their relationship. That also helps make sense of the flashes we’ve seen him get of running someone 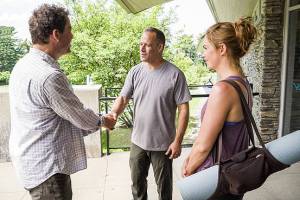 over. Turns out (at least, right now, it seems) he’s been fighting against the ending he really wanted for the book: Running her over (? or presumably some similar death-filled ending for her). Likely he knows he’s taking out a bit of aggression over having “[blown] up his whole life over her,” as he seems constantly reminding her these days. But he also wants her to remember that the book isn’t real. Even if it is something of an outlet. Which is what makes his “we end up together” reassurance of the end of the book so hurtful to Allie. She’s much further down the road of reconciling how much truth he put in, she just wish he’d be honest about it.

And in the present day we get our second flash-forward that isn’t couched in anyone’s perspective. At first it seems like it’s from Helen’s, in her lawyer’s office, as she offers to put the brownstone up to help pay a witness (I’m guessing, based on her outburst with her mother that she is no longer financially linked to her parents? Even though the money is her dad’s). But then she leaves and we see Richard Schiff-lawyer call Oscar—who we know it is, thanks to last week’s scene between him and the detective.

Now that we know that Noah’s flashes are tied to the desired ending to the book it takes away a bit of the confusion about what his role is in all this if it wasn’t the murder. But still know him and Alison seem to be hiding something—maybe Scotty finds out that Alison’s baby is from her (presumably) one-night stand with Cole during her six-week time away from Noah? Her pregnancy is one of those plot points that reconciles a lot of holes in what we understand so far. No wonder she wants a little clarity from Noah.