This post is a response to my brilliant friend Eleanor’s post “No Angel: Why I’m not part of the Beyhive.”

Beyonce is everywhere. It’s been almost two decades since she busted onto the scene with Destiny’s Child and she’s still as relevant as ever. Perhaps more so as a solo artist, seeing as how last December she dropped a surprise album that all but broke the Internet. She’s surpassed simple pop star status; she is a lifestyle.

She is no longer merely human, she has been deified. The pop cult has made her their goddess.  -Eleanor Cummins

As I understand it, Eleanor’s problem with this is that she hasn’t done much to earn this. She’s not the first person to build up a business empire, nor does she have a monopoly on fabulous vocals. In fact, considering her ubiquity, Beyonce leads a quiet life, complete with quiet philanthropy.

So if Beyonce really does command a Beygency, why isn’t she using that power for great good?

Neither Eleanor nor I deny she is talented. Girlfriend knows how to own a stage. But unlike Eleanor, I don’t think it’s just because she’s missing an Uncle Ben to sit her down and give her the talk about great power and great responsibility. She’s simply human.

Beyonce has never claimed deity status. She expresses some (I’d argue, well-earned) bravado, but I don’t see that as a bad thing. And though I’d say it’s been a common theme in her work, her latest album contains more glimpses into the inner-workings of Queen Bey than ever.

Her god-status is often expressed by fans often to fully encapsulate how much respect they hold for her. Whether you write it off as hyperbole or not, it speaks volumes of Beyonce’s ability to not only capture but inspire her clientele.

As Eleanor says, much of Beyonce’s power is in her ability to communicate an audience that they are “strong, bold, ready to take on a world that isn’t necessarily ready for them,” which for me indicates that Beyonce’s sway is beyond a dollar amount. Personally speaking, I don’t have a count for the number of times I’ve turned on a Bey anthem to pump myself up. She inspires and commands a higher bar of respect for not just women, but women of color.

Coloring outside the lines

Simply existing as a woman of color who commands an empire that could probably defeat a Persian army at the Battle of Thermopylae, she is performing an act of social justice. Representation matters, even if the effects of it aren’t immediately apparent. As a pop star, woman of color, and powerful cultural icon she’s not immediately afforded a cone of privacy, and so she owns her image like a boss. She is sexual, sensual, and a sensation, but she is also a mother, a wife, and a person.

She is certainly not above criticism. Though I (clearly) am a fan, her self-titled album contains some problematic elements (her husband’s verse that contains reference to domestic abuse, for example). But as a grown woman she addresses these criticisms in her own way: legitimate concerns about her misusing Challenger recordings get a courteous press release, bullshit objections to her being proud of her relationship and her body get called out in musical form. What I respect about Beyonce is not that she is above critique, but that she has a system for evaluating what is worth her responding to, and in what ways, incorporated into her image.

As a liberal, 20-something woman in Seattle I’m elated when I see that Beyonce has welcomed the label of ‘feminist’ with open arms. I’m excited when I think about the number of people–young women especially–whose eye balls were seared with Beyonce posing powerfully in front of a huge “Feminist” proclamation at the VMAs this year. This, to me, represents a kind of outreach beyond any dollar amount she could donate. 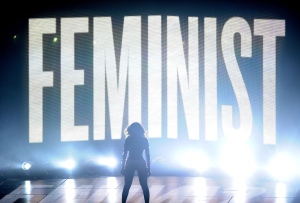 But I also don’t think Beyonce has an obligation to any sort of proclamation of her beliefs or social justice standpoints. To me, her existence is already a huge statement. When she steps out and really draws attention, there’s an added weight to that because she’s not just throwing her powerful label behind every hashtag. For every #YesAllWomen there’s a #Kony2012.

As an activist myself I can tell you that compromises must be made. There are days when I don’t have the energy to educate someone on why what they’re saying is problematic; conversations I don’t feel like moderating, or places I don’t feel safe calling out the -isms. There are times when I am an activist, but I am not in a place to be active. And the truth of the matter is it’s not my, or Beyonce’s, or Laverne Cox’s, or anybody’s job to be the moderator of social justice.

I love me some celebrities that get down with leveraging their power, but I understand that while on the one hand Jennifer Lawrence is standing up for women and their digital privacy, she is also making offensive claims about how at least the pics show she’s “all lady.” I’m appreciative when those I admire also make a public stand for values I believe in, but I can never expect it of them–and I certainly can’t expect them to own that label with perfection. With the abundance of online social justice communities no one owes somebody a role as educator.

It’s up to Beyonce to use her elevated status for what she wants. She clearly doesn’t play around with her life or her image, and chooses to play most things close to the vest. For me, I’m happy to have a strong woman who–when she decides to–is willing to stand and belt that she was here. Because at the end of the day, she makes me feel like I could run the world.